This year we’re pleased to announce that Christopher Totten will be joining our speaker list! Christopher will be speaking on Level Design and Architecture, and we’re excited to have him this year. 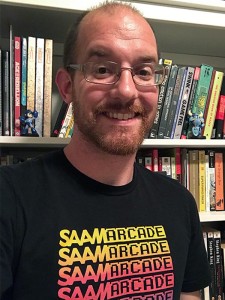 Christopher Totten is an Assistant Professor in the Modeling, Animation, and Game Creation program at Kent State University. He is the founder of Pie For Breakfast Studios, an award-winning Northeast Ohio independent game company, and has done work as an artist, animator, level designer, and project manager in the game industry. He holds a Masters Degree in Architecture with a concentration in Digital Media from the Catholic University of America in Washington, DC. Chris is an executive organizer for the Smithsonian American Art Museum (SAAM) Arcade and lifetime member of the International Game Developers Association (IGDA). Chris has written articles featured on Gamasutra, Game Career Guide, and other publications and is a frequent speaker at game industry conferences such as GDC, East Coast Game Conference, GDEX, and others. He is the author of An Architectural Approach to Level Design, published in its second edition in 2019 and Game Character Creation in Blender and Unity, released by Wiley Publishing in 2012. He is also the editor of the collected volume, Level Design: Processes and Experiences.