This year we are super excited to have Leanthony “AJ” Edwards come and speak to our folks at Vector this year! Leanthony is a lawyer out of Cincinnati and will be talking about how to protect yourself and your game from an IP standpoint at the outset in order to save time and money. 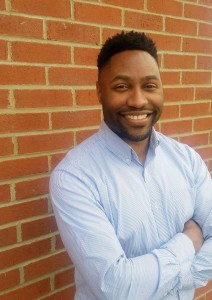 Leanthony (“AJ”) Edwards is a Cincinnati based attorney who helps developers, entertainers and content developers navigate all legal issues related to intellectual property, advertising, licensing, data privacy/cybersecurity, and other tech related transactions. He is passionate about the gaming community so you might spot him at various local conferences in addition to GDC or Gamesforum. As an avid Gamer, he swears by Baldur’s Gate II: Shadows of Amn as the best game of all time and will articulate the elements that make the game great if pressed.

If you’re interested in Leanthony’s talk on Saturday, check out our event this year!  Be sure to check out our ticket page and pick up your tickets for this years event! Vector 2019 is April 26-27!

This year we’re incredibly psyched to have Phil Profitt, an Xbox Account Manager with Microsoft and Kentucky Native, to speak at Vector 2019!

Phil Profitt is currently a developer account manager for Xbox at Microsoft, and has been working in the games industry for 10 years now. He grew up in the middle of nowhere in Bourbon County, KY. After graduating from University of Kentucky as an electrical engineering major he made his way to Tokyo, Japan to work in the games industry as a software engineer.

Recently becoming a father, in his ample free time Phil loves playing anything developed by FROM Software, and enjoys all the amazing Pacific Northwestern outdoor activities. In his profile picture you can see him spending time on his childhood friend’s farm in the Seattle area.

This year we’re pleased to announce that Christopher Totten will be joining our speaker list! Christopher will be speaking on Level Design and Architecture, and we’re excited to have him this year.

Christopher Totten is an Assistant Professor in the Modeling, Animation, and Game Creation program at Kent State University. He is the founder of Pie For Breakfast Studios, an award-winning Northeast Ohio independent game company, and has done work as an artist, animator, level designer, and project manager in the game industry. He holds a Masters Degree in Architecture with a concentration in Digital Media from the Catholic University of America in Washington, DC. Chris is an executive organizer for the Smithsonian American Art Museum (SAAM) Arcade and lifetime member of the International Game Developers Association (IGDA). Chris has written articles featured on Gamasutra, Game Career Guide, and other publications and is a frequent speaker at game industry conferences such as GDC, East Coast Game Conference, GDEX, and others. He is the author of An Architectural Approach to Level Design, published in its second edition in 2019 and Game Character Creation in Blender and Unity, released by Wiley Publishing in 2012. He is also the editor of the collected volume, Level Design: Processes and Experiences.